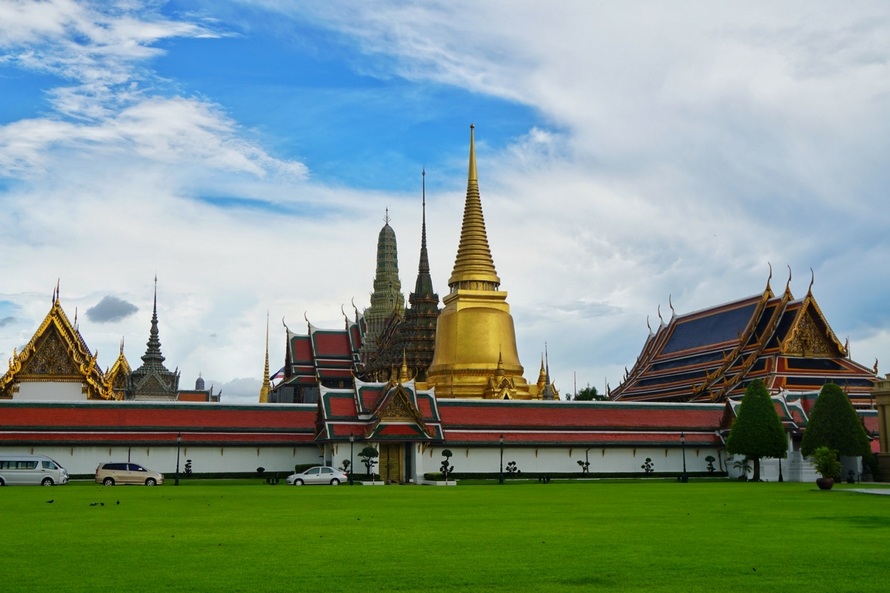 It is one of the most popular places to visit in Asia, let alone the world, and having been five times myself, I can see why! It has both the busy and relaxing, loud and quiet, expensive and cheap. No matter your travel style or interest there really are so many amazing things to do in Bangkok.

When I spent time in this city on my first trip around the world, I managed to cover a lot of ground, including the temples and markets and a touch of the nightlife. Coming back a few years later though I learned I had only scratched the surface  of what there is to do in Bangkok, doing most of my previous activities and a bunch more.

I’ve been asked a few times about what I would recommend most for someone visiting Bangkok so figured it was time to put together a post on it.

My Favourite Things To Do in Bangkok

I’m not sure I have ever seen so much gold and sparkle in one place. On a sunny day, sunglasses are a must because there is so much to reflect the light its almost impossible to keep your eyes open. The temples and stupas are mesmerizing and I am so fascinated by the guards who stand on duty. 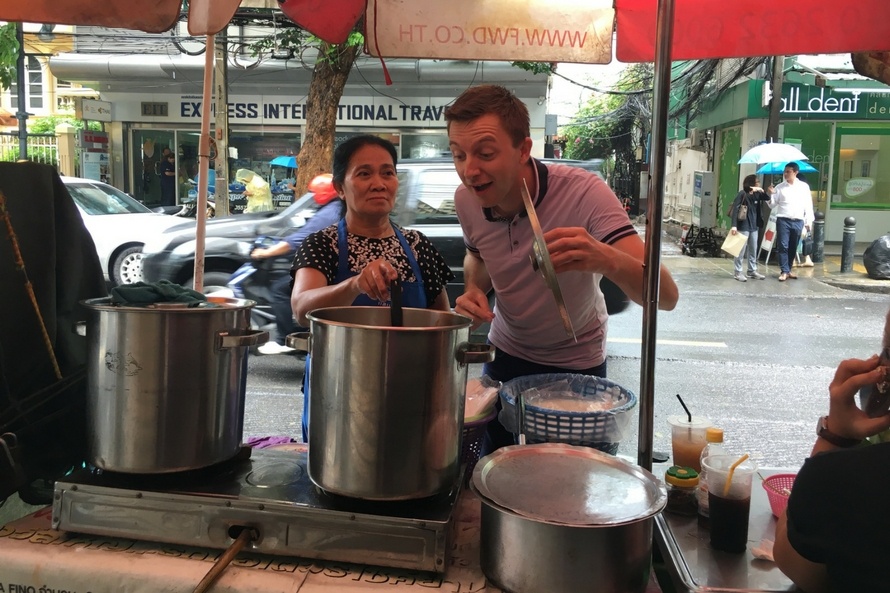 Many believe Bangkok has the best street food in the world. It’s the truth! From curries, to pad thai, to meat on a stick, to juices, to mango sticky rice. You name it, someone makes it. For next to nothing you can order some fresh cooked food, sit down on a plastic stool and eat to your hearts content. Then, walk a few steps down and eat from the next stall that catches your eye.

Ride in a Tuk Tuk

One of the main forms of transportation in the city and South East Asia for that matter, Tuk Tuk’s are a blast! They are loud, colourful and zip in and out of traffic in a way a taxi could only dream of. Flag one down, negotiate the price and then hold on tight! 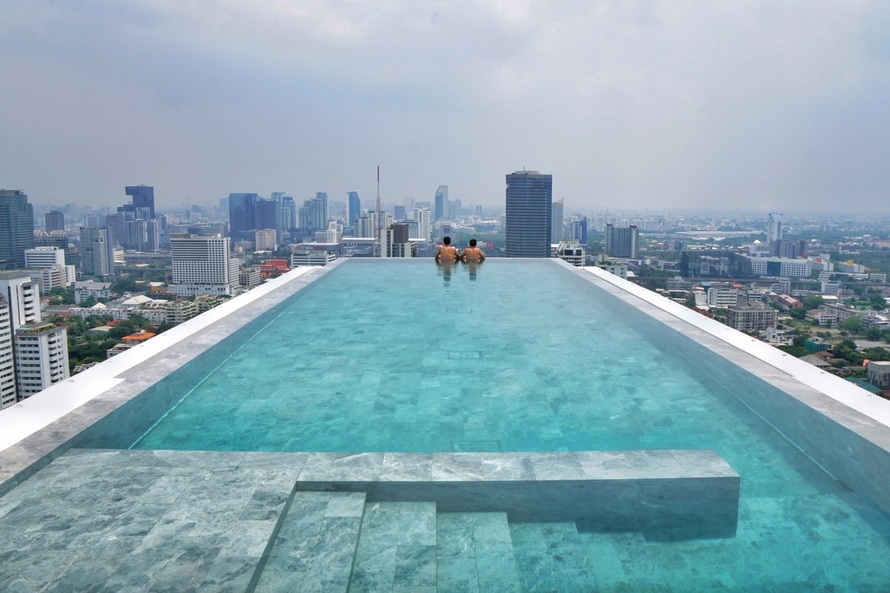 When it comes to accommodation, Bangkok covers all ends of the spectrum. You can certainly spend next to nothing for your digs, but keep in mind that your money will go far. This city is a perfect place to treat yourself and splurge on luxury. You’ll appreciate it after a full day navigating the often manic city streets and sights. That said, while there are many hotels that ‘claim’ to be 5 star, there are only a select few that truly are. After a lot of research, I found what I think is the best hotel in Bangkok and stayed in a suite at the 137 Pillars Suites and Residences Bangkok. Not only did I feel like royalty but the infinity pool alone will blow your mind.

Who doesn’t love a massage? Okay, who doesn’t love a CHEAP massage. Be it foot, back, head, Thai, Swedish…you get the idea…massages in Thailand cost next to nothing so you’ll easily be coming back every day, and for hours at a time! 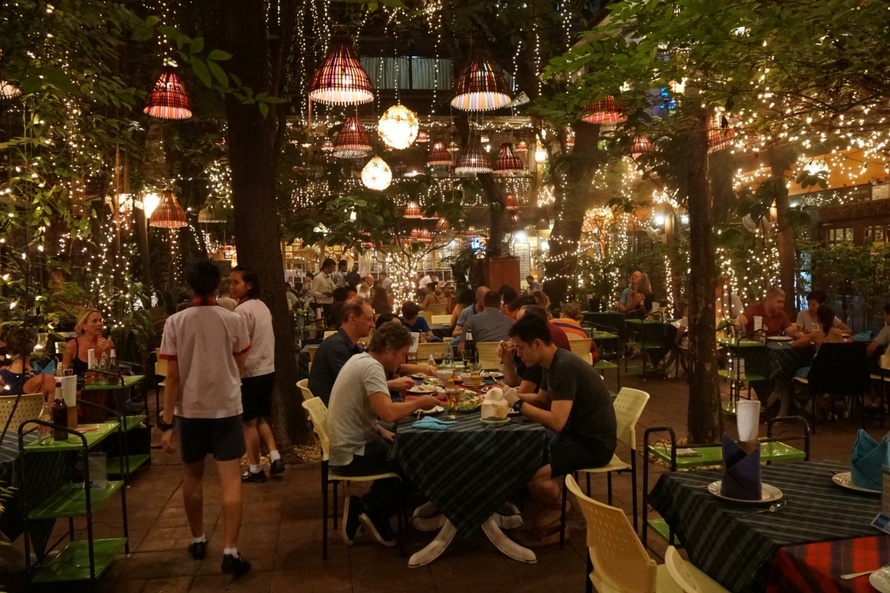 Eat at Cabbages and Condoms

Introduced to me on my first visit to Bangkok a number of years a go, Cabbages and Condoms is a restaurant with a cause. In an effort to promote family planning and encourage acceptance of the concept in a culture that traditionally does not, a portion of proceeds go towards this initiative. Oh, and where did the name come from? The owner wanted condoms to be as accessible as cabbages. Cheeky!

Stroll Through a Market

With so many public markets in Bangkok, it is less about finding a market and more about choosing which type of market you want explore. In truth, you don’t need to actually buy anything. Just walking around and soaking in the atmosphere makes for a great adventure! Most recently, the Ratchada Train Market has become very popular with everything from clothing to food. 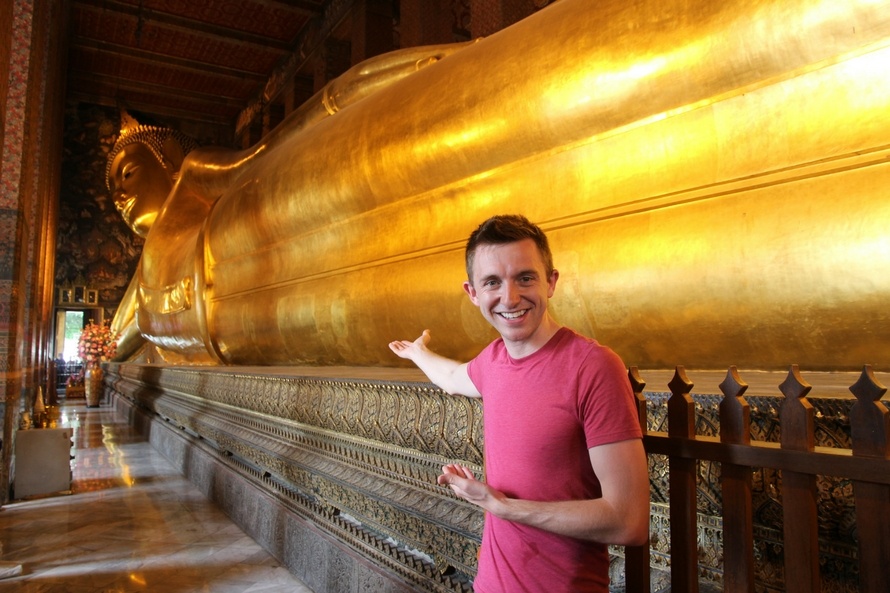 Hands down my FAVOURITE thing in Bangkok and one of my top sites in the world is The Reclining Buddha at Wat Pho. At 46 metres long, 15 metres high and made of gold, this buddha is absolutely magical. Standing next to it you feel so small and can only look up and marvel at it’s beauty. As I mentioned, I’ve been to Bangkok five times and I visited the Reclining Buddha each and every time.

And there you have it, some of the most epic things to do in Bangkok. While this list could be ten times as long, hopefully it gives you a solid starting point to making the most out of your time in this one of a kind city.

Thailand is the land of smiles, so as long as your smiling with them, you can’t go wrong.

What are your favourite things to see and do in Bangkok? What did I miss? Leave it in the comments below.