Sitting almost smack dab in the middle of Myanmar, Mandalay is the second largest city in the country and arguably the friendliest.

Less then an hour after arriving, we set off on foot to find something to eat. It took just a few minutes a local was waving us over to join him and his friends for food and drinks. A perfect start to our two weeks in Myanmar.

The next day many locals were smiling and waving, pleased to see two foreigners riding around on bicycles wearing longyis, the traditional dress.

Whether Mandalay is your starting point or grand finale in this country, hopefully this collection of spots and suggestions we came across will help you make the most of your time in the city.

We flew into Mandalay International Airport from Bangkok. Be sure to have sorted your visa well in advance. We then took a private taxi to our hotel in central Mandalay. The cost was 15000 KS or $12 USD. There is also a shuttle van that leaves every 2 hours for 4000 KS or $3 USD per person.

From Mandalay we went to Bagan and booked a transfer through our hotel. We were picked up in a truck and transferred by a basic bus. 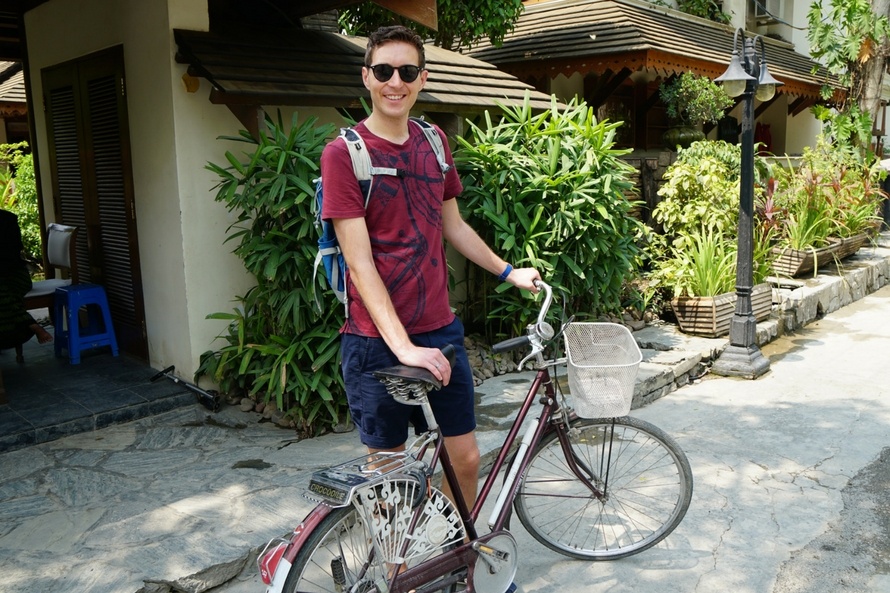 If you stay near the royal palace, hire a bicycle to explore the city. With very little auto traffic, it was relaxing to zip around as you please. At each temple there is usually someone who will keep an eye on your bike for a small fee.

If you are exploring further than a bicycle will take you, to U Bein Bridge for example or another region of the city, you can hire a car pretty easily. We went through our hotel as the price was pretty close to the drivers on the street.

WHERE TO EAT IN MANDALAY 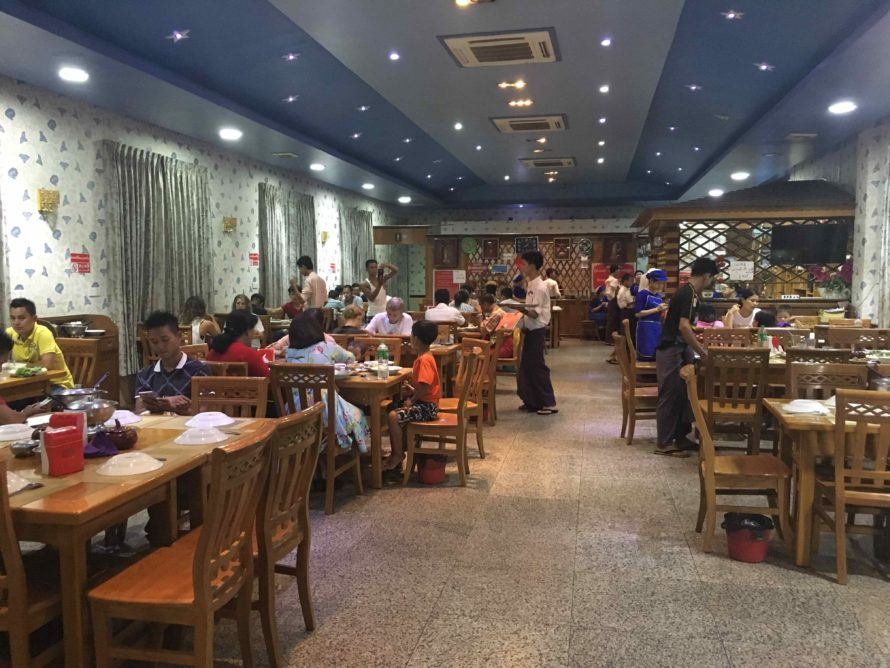 We came across this restaurant while on our way to see the Moustache Brothers show nearby. Serving up inexpensive, traditional Burmese food, the place was busy with locals and the service was super quick.

WHERE TO STAY IN MANDALAY, MYANMAR

As the city is quite big, there are also many places to stay though they can be hit and miss. We did a lot of research and wanted to be somewhere relatively close to Mandalay Hill and the most popular temples. Stick close to the royal palace, ideally the east side, which will give access to street food and other spots for exploring. 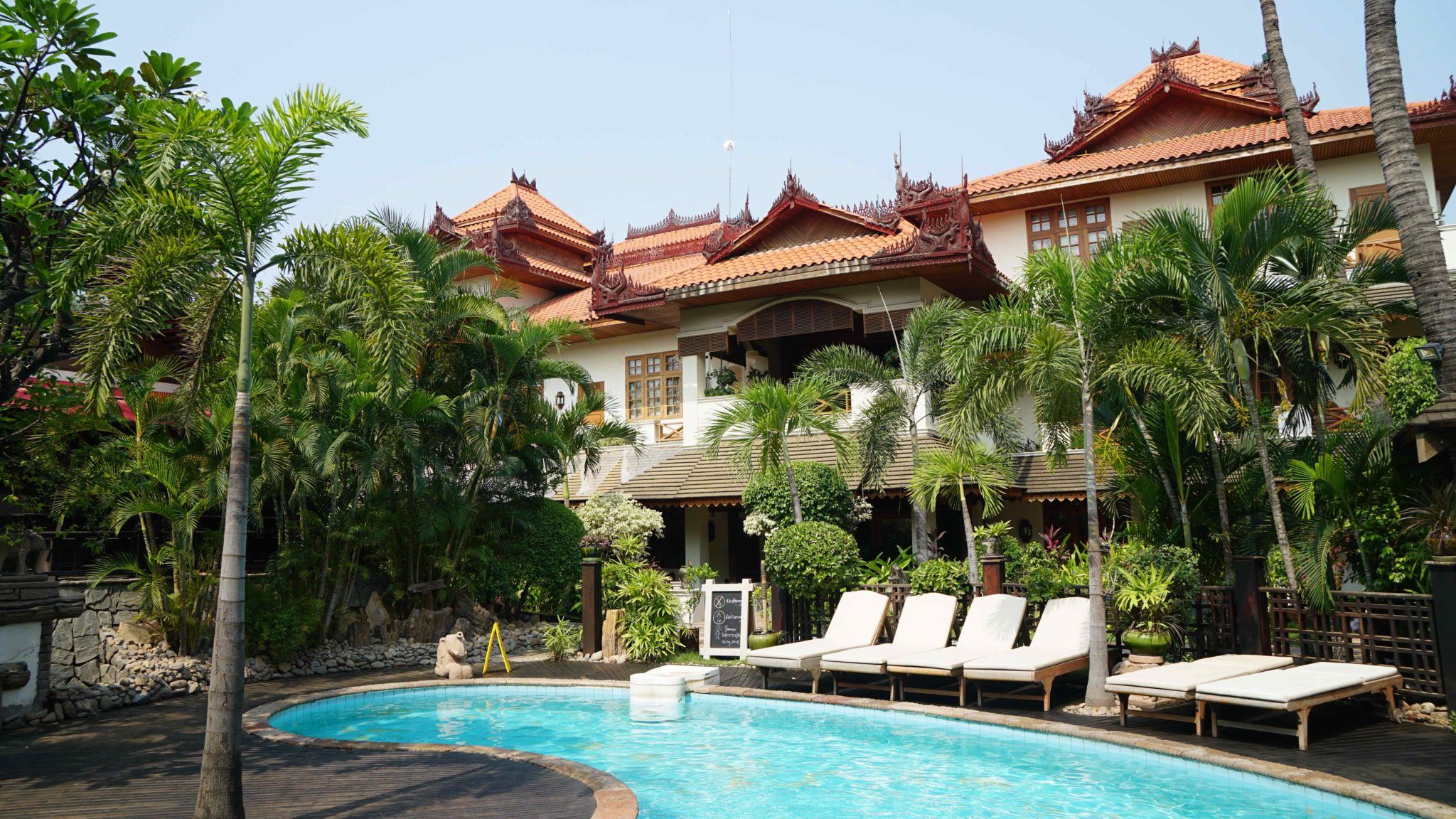 Coming straight from the airport, we were welcome with cold towels to cool us off and our timing couldn’t have been better – it was Happy Hour! Before even checking into our room, we sat by the pool sipping a refreshing complimentary cocktail with the moon sitting above us in a perfectly clear sky. Each of the four styles of rooms are named after a different ethnic group in Myanmar. We stayed in a Kachin room, which had a private outdoor shower. After a day of biking around in the often sweltering heat, that shower was a gift from the gods. Speaking of bicycles, the hotel offers free wheels for you to zip around mandalay, removing the hassle of picking them up or dropping them off somewhere. Finally, the hotel itself is absolutely beautiful, featuring a traditional design done in wood and gardens that help you relax in peace. c

Check Availability and Prices on:
Booking.com or Agoda.com

THINGS TO DO IN MANDALAY 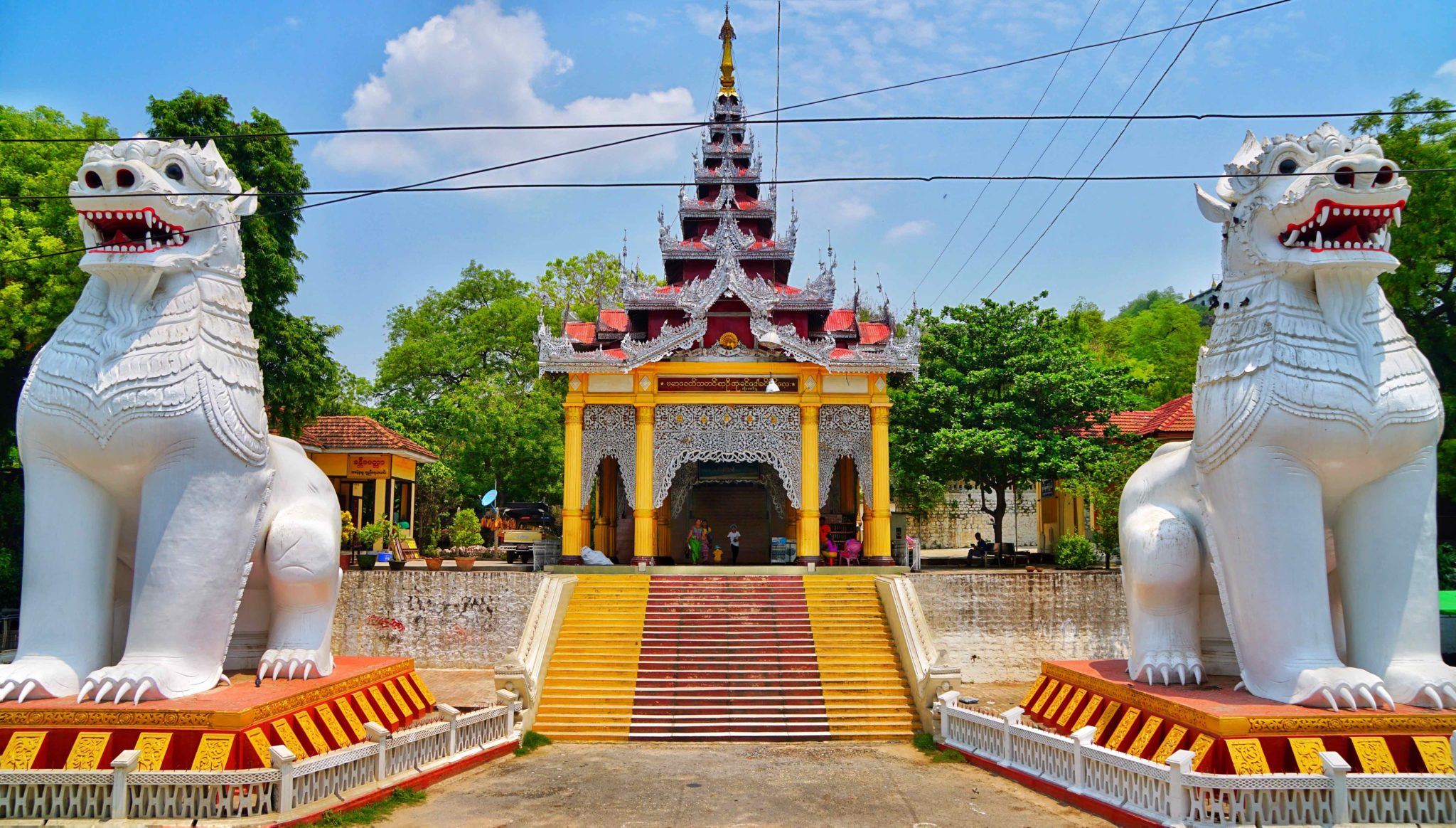 The very first thing we explored in Mandalay, and Myanmar for that matter, was Mandalay Hill. While I can’t say it is the most beautiful place in the city, it’s certainly the most active. Starting early in the morning to beat the midday heat, we began our climb. Stair after stair, we slowly ascended and along the way encountered an array of buddhas in all shapes, sizes and colours. We also crossed paths with many locals who were keen to take a photo with us, likely perplexed as to why we were walking to the top. We later discovered that there was an escalator/truck combination we could have taken. The journey is worth it but quite the effort and not recommended for those whose struggle with stairs. 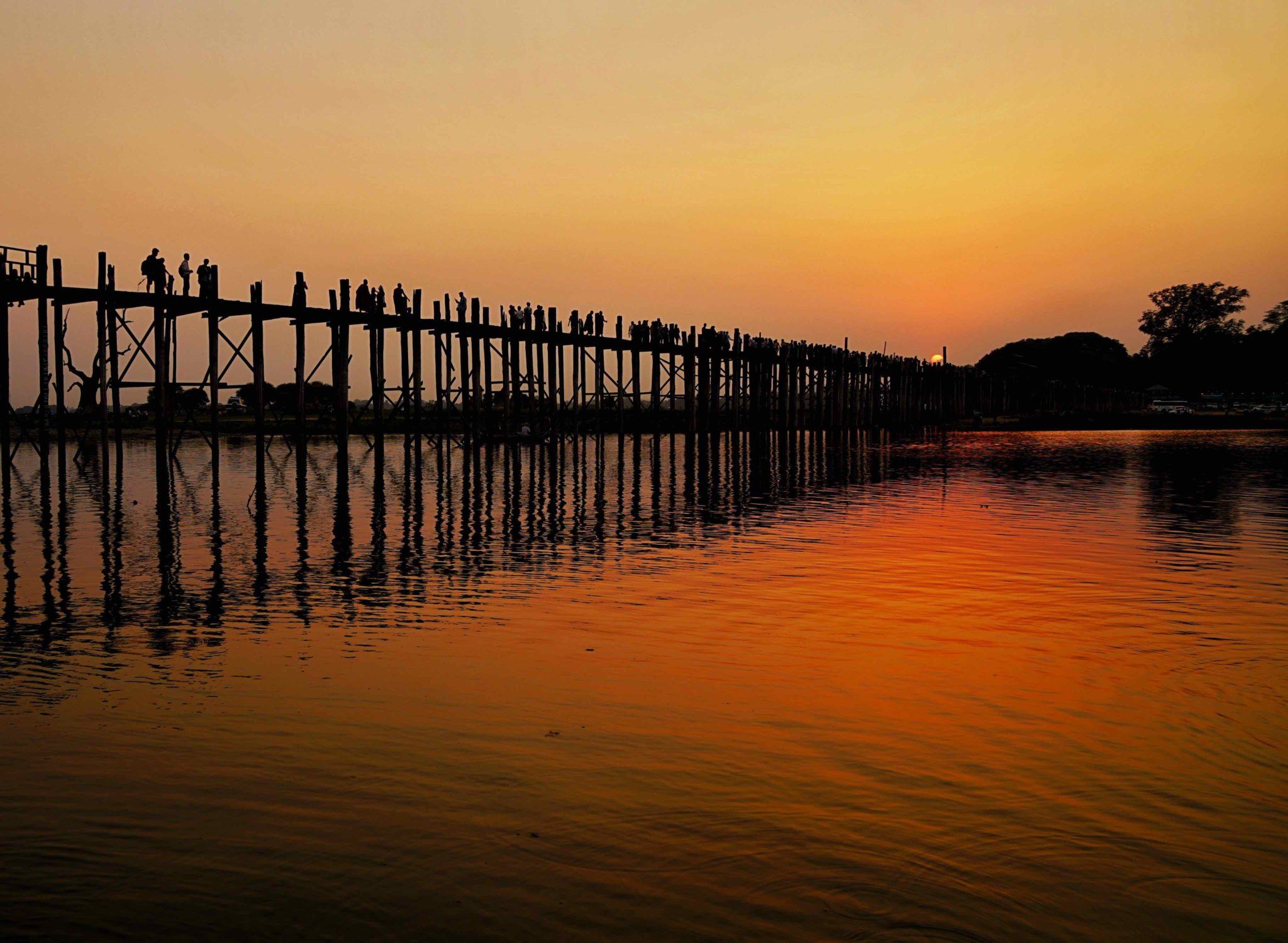 Perhaps the most beautiful sight near Mandalay, it would be a shame to come to Myanmar and not visit U Bein Bridge. Still used today as a footbridge for locals crossing Tuangthaman Lake, it is believed to be the longest and oldest teak bridge in the world. The most common time to visit is at sunset when the bridge and it’s crossers becomes silhouetted against a fiery sky. At certain times of the year you can watch the sun set right behind the bridge. Though a bit touristy, hiring a boat to take you out on the water is worth it. Costing about $10-12, our driver let us walk along the bridge and picked us up on the other side. With our cameras (and beers) in hand, we floated onto the water to watch one of Mother Nature’s greatest shows. Tip: your guide will push to keep the price up with their reason being they ‘can only do this boat trip once a day.’ Funnily enough, they will also try to hurry you back to shore before the sun has completely set. Remind them that ‘this only happens once a day’ and there’s no reason to head back early. Some of our best views were at the very end, when most boats had already returned to shore.

Simplify your journey with a private guide to get you to and from U Bein Bridge.
Click here to book on Viator 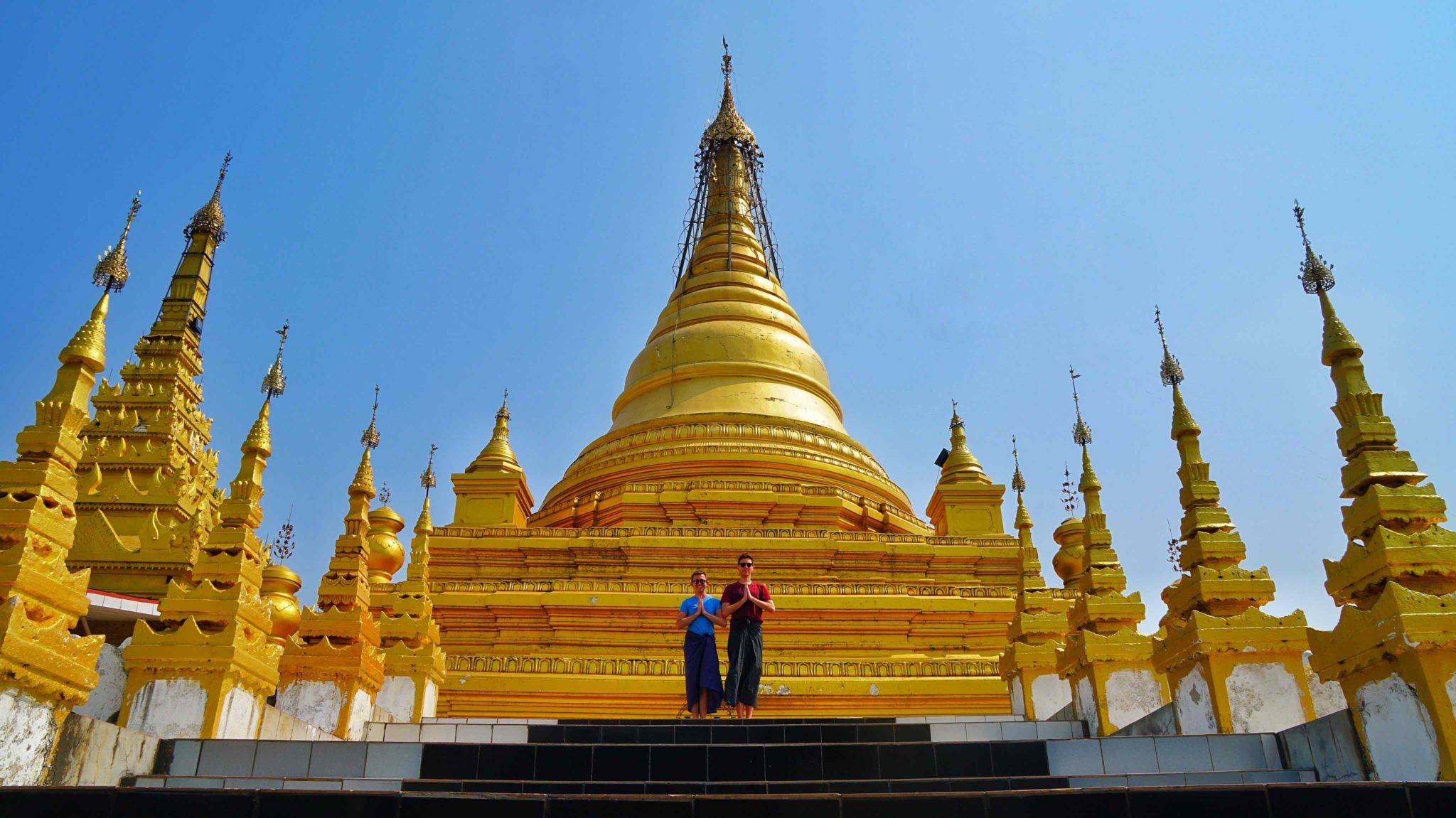 There are so many temples you can wander through in Mandalay. Often, in the search to find a specific one, you’ll get lost and end up exploring a temple you didn’t intend to. That was the case with Sandamuni Temple. The massive golden pagoda in the centre is stunning. If you love symmetry like me, you’ll love this temple because it’s everywhere! We also took one of my favourite photos on our trip in Myanmar here. Again, symmetry for the win. 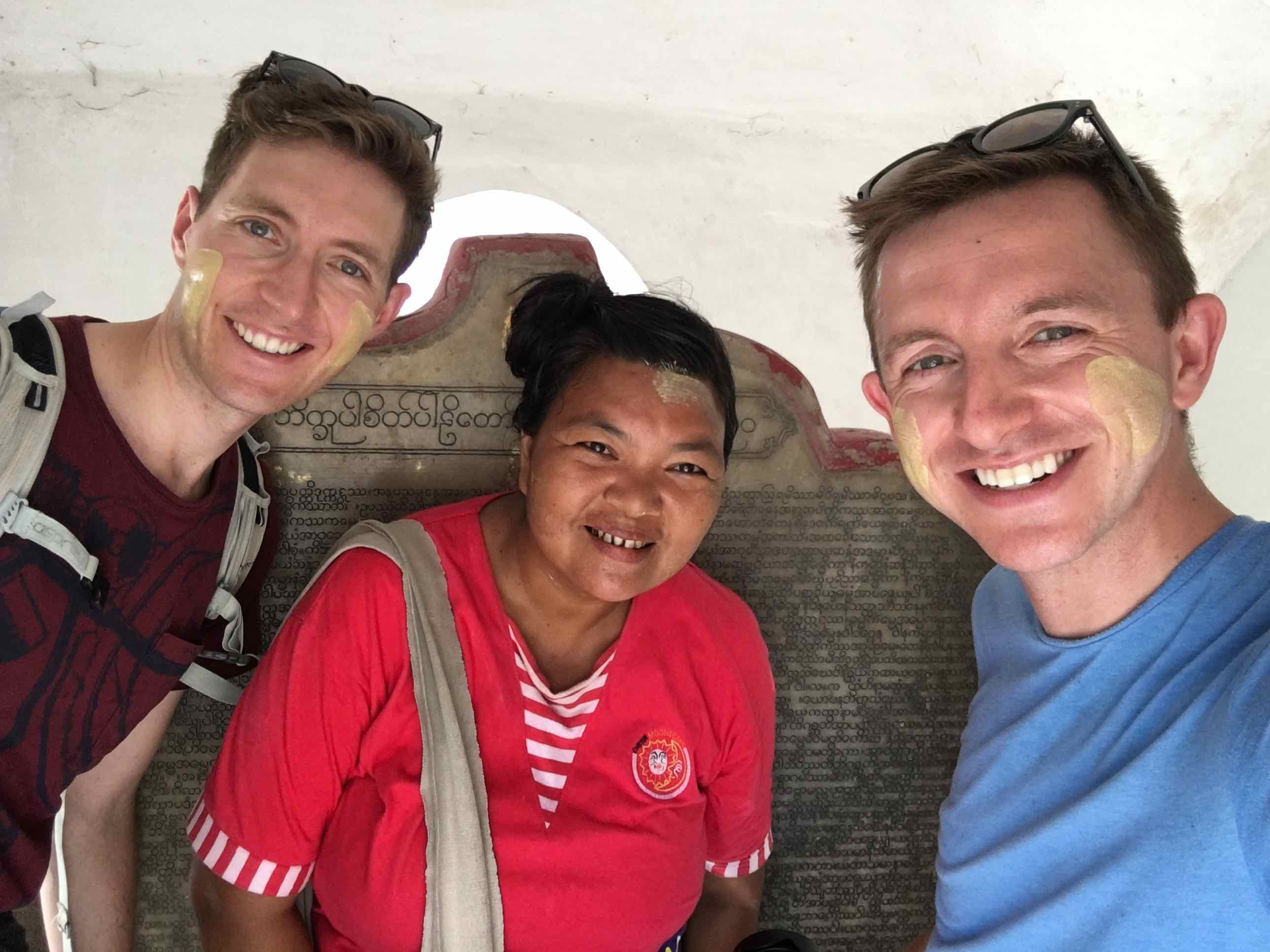 We had marked this temple as a must as it apparently home to the largest book in the world. After about 20 minutes of searching inside for this book, a lady offered to help us. She took us to one of the many little covered slabs with writing on them. It was there that she did her pitch to get us to buy some postcards. We caved, because we actually liked the cards. Before leaving she put traditional gold paint on our faces. Cheeky, but very common. Turns out we couldn’t find the book inside the temple because the temple itself is ‘the book’. Each of the slabs with writing is a page. Also cheeky! 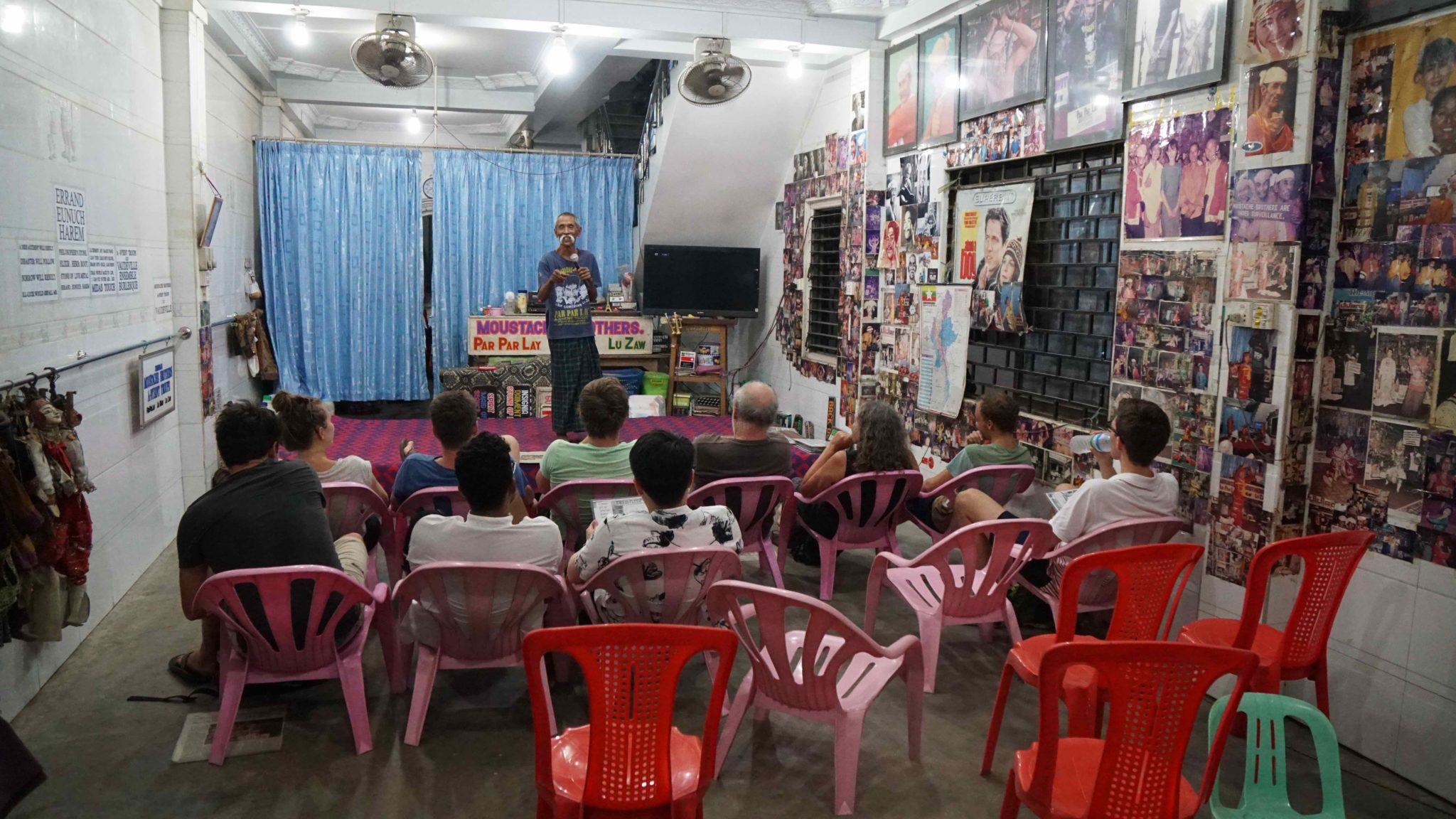 Suggested by Becki of Borders of Adventure, I was told The Moustache Brothers show in Mandalay was one of the most random things I would ever see and a must before leaving the city. Random is certainly one way to describe it. Hilarious, informative, historical and worth it would also be suitable descriptors. Lasting about an hour, the show is a mix of comedy, traditional dance and discussion and criticism of the Burmese Military regime. Jokes aside, the Moustache Brothers have played an important role in the dialogue of Myanmar’s dark history through the show, even being jailed for sharing their message. Support their cause, hear their story and have a few laughs. You can’t go wrong.
More Info

WHAT DID I MISS?

Hopefully this guide gets your visit to Mandalay, Myanmar off on the right foot!
If you tried or experienced something particularly amazing that I should include, share it in the comments below or send me an email here.