I’m on the longest train ride of my life. Not metaphorically, in fact it’s going by quite quickly. But at two and half days, this is the greatest amount of time I have spent on a train, bus or in a car for that matter, even beating out a two day train I took from China to Tibet.

The destination is Edmonton, Alberta in the great Canadian west. I’ve never seen the prairies of my country so with the choice to fly or take the train I opted for the latter. Leaving twice a week from Toronto, Via Rail Canada’s flagship route, ‘The Canadian’, takes passengers from the big smoke around the Great Lakes to Winnipeg, Manitoba, Saskatoon, Saskatchewan, Edmonton Alberta and ending in Vancouver, British Colombia with more tiny town stops then you can begin to remember. 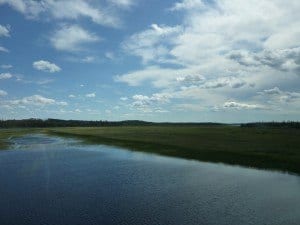 The ticket, which after the massive discount through Via’s Express Deals cost a mere $163, gets you a reclining seat in economy class. While it is not the most comfortable for sleeping, I have to remind myself how cheap the seat was in comparison to the usual price. Without the deal, I would have paid nearly $600 for the same ticket – one way!

With the sun ducking behind the trees, we’ve wrapped up our first full day on the train and prepping for our second night. We are nearly halfway done our journey and are still in Ontario! I never realized how insanely big the province I live in actually is. Of the 2 1/2 day trip from Toronto to Edmonton, crossing 4 provinces, over half is spent in Ontario. 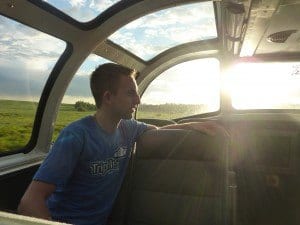 Up to now we have constantly been surrounded by trees. Creating a sort of tunnel for the train, the tracks wind their way through the forests and then out of nowhere there is a break in the bush and you spot a beautiful, sparkling lake. You almost have to wonder if anyone has ever stepped foot in these woods or explored these waters.

The best seat on the train is in the observation car where a glass bubble allows you to sit and marvel at the nature around you.

In the morning we arrive in Winnipeg, Manitoba for a three hour rest stop. Not only will we get to stretch our legs and get some fresh air but we will have enough time to explore the city.

Have you ever taken a train in Canada? Where’d you go?

16 thoughts on “Crossing Canada By Train: Part One”